We present 3D-MPA, a method for instance segmentation on 3D point clouds. Given an input point cloud, we propose an object-centric approach where each point votes for its object center. We sample object proposals from the predicted object centers. Then we learn proposal features from grouped point features that voted for the same object center. A graph convolutional network introduces inter-proposal relations, providing higher-level feature learning in addition to the lower-level point features. Each proposal comprises a semantic label, a set of associated points over which we define a foreground-background mask, an objectness score and aggregation features. Previous works usually perform non-maximum-suppression (NMS) over proposals to obtain the final object detections or semantic instances. However, NMS can discard potentially correct predictions. Instead, our approach keeps all proposals and groups them together based on the learned aggregation features. We show that grouping proposals improves over NMS and outperforms previous state-of-the-art methods on the tasks of 3D object detection and semantic instance segmentation on the ScanNetV2 benchmark and the S3DIS dataset. 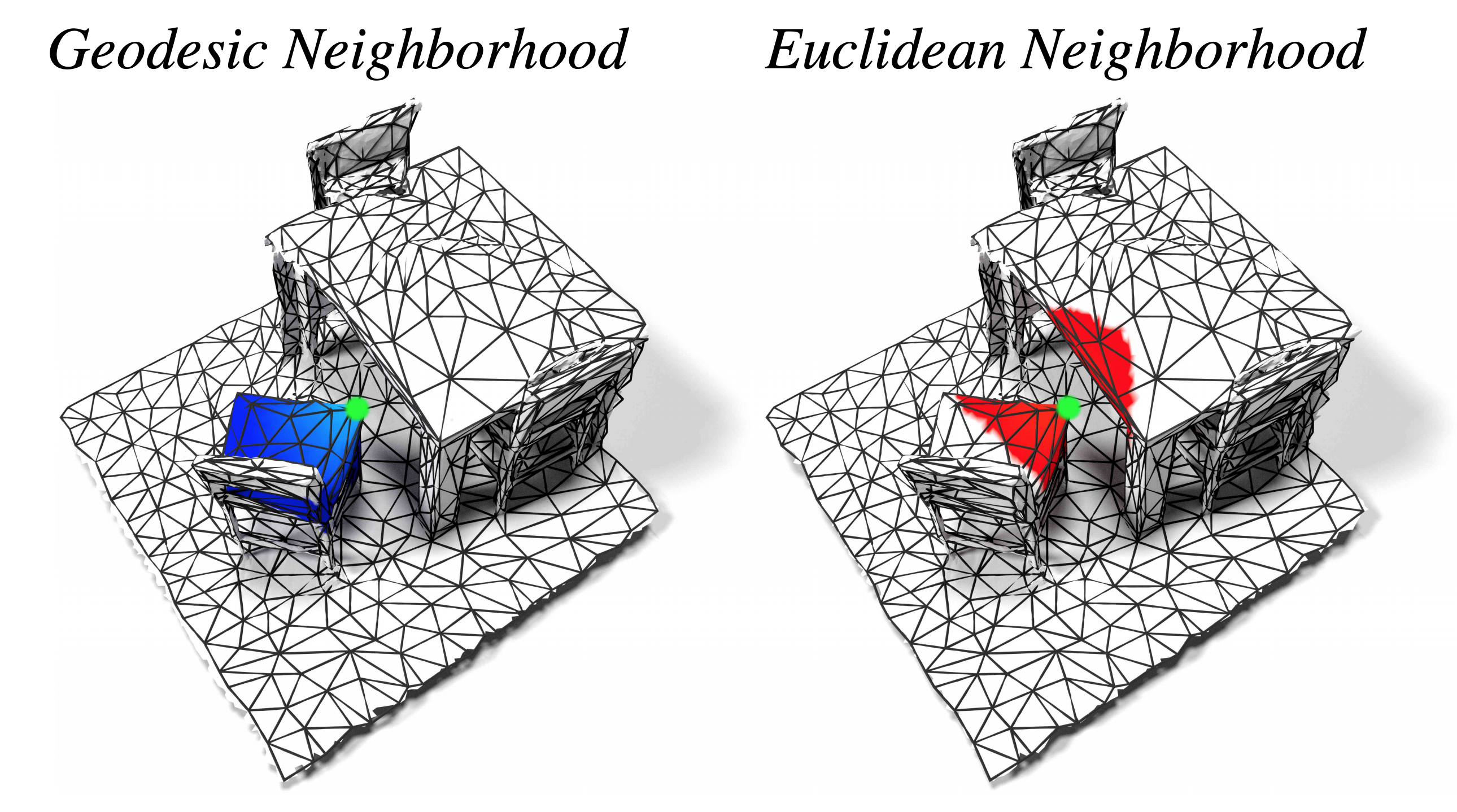 We propose DualConvMesh-Nets (DCM-Net) a family of deep hierarchical convolutional networks over 3D geometric data that combines two types of convolutions. The first type, geodesic convolutions, defines the kernel weights over mesh surfaces or graphs. That is, the convolutional kernel weights are mapped to the local surface of a given mesh. The second type, Euclidean convolutions, is independent of any underlying mesh structure. The convolutional kernel is applied on a neighborhood obtained from a local affinity representation based on the Euclidean distance between 3D points. Intuitively, geodesic convolutions can easily separate objects that are spatially close but have disconnected surfaces, while Euclidean convolutions can represent interactions between nearby objects better, as they are oblivious to object surfaces. To realize a multi-resolution architecture, we borrow well-established mesh simplification methods from the geometry processing domain and adapt them to define mesh-preserving pooling and unpooling operations. We experimentally show that combining both types of convolutions in our architecture leads to significant performance gains for 3D semantic segmentation, and we report competitive results on three scene segmentation benchmarks. 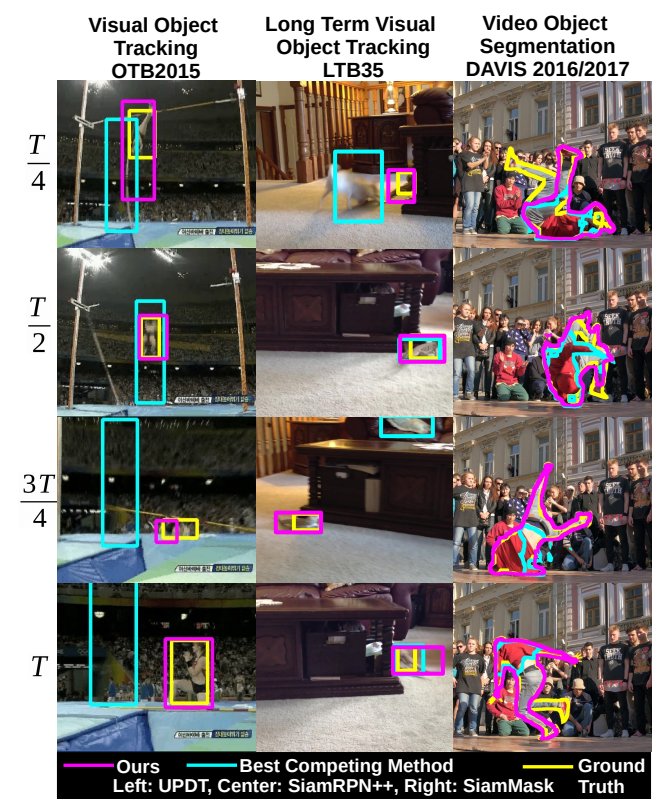 We present Siam R-CNN, a Siamese re-detection architecture which unleashes the full power of two-stage object detection approaches for visual object tracking. We combine this with a novel tracklet-based dynamic programming algorithm, which takes advantage of re-detections of both the first-frame template and previous-frame predictions, to model the full history of both the object to be tracked and potential distractor objects. This enables our approach to make better tracking decisions, as well as to re-detect tracked objects after long occlusion. Finally, we propose a novel hard example mining strategy to improve Siam RCNN’s robustness to similar looking objects. The proposed tracker achieves the current best performance on ten tracking benchmarks, with especially strong results for long-term tracking. 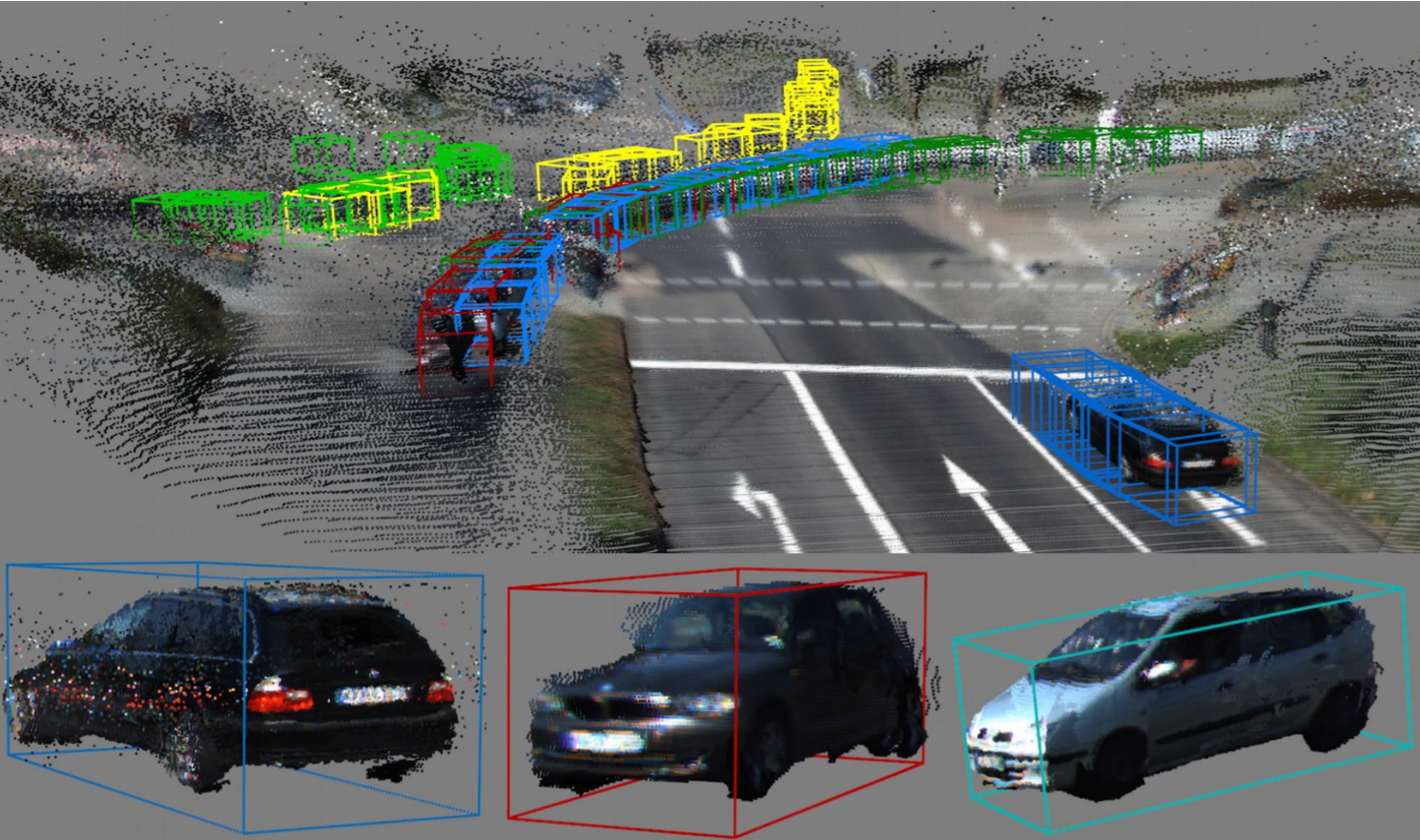 Object tracking and 3D reconstruction are often performed together, with tracking used as input for reconstruction. However, the obtained reconstructions also provide useful information for improving tracking. We propose a novel method that closes this loop, first tracking to reconstruct, and then reconstructing to track. Our approach, MOTSFusion (Multi-Object Tracking, Segmentation and dynamic object Fusion), exploits the 3D motion extracted from dynamic object reconstructions to track objects through long periods of complete occlusion and to recover missing detections. Our approach first builds up short tracklets using 2D optical flow, and then fuses these into dynamic 3D object reconstructions. The precise 3D object motion of these reconstructions is used to merge tracklets through occlusion into long-term tracks, and to locate objects when detections are missing. On KITTI, our reconstruction-based tracking reduces the number of ID switches of the initial tracklets by more than 50%, and outperforms all previous approaches for both bounding box and segmentation tracking. 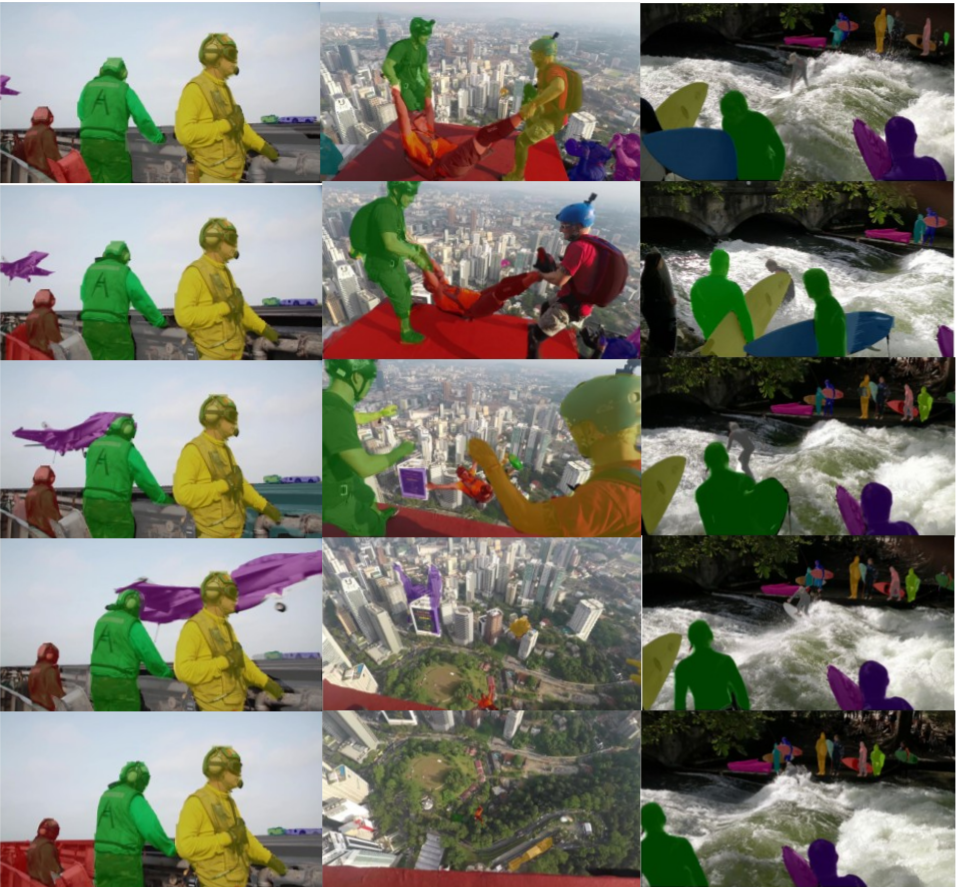 We address Unsupervised Video Object Segmentation (UVOS), the task of automatically generating accurate pixel masks for salient objects in a video sequence and of tracking these objects consistently through time, without any input about which objects should be tracked. Towards solving this task, we present UnOVOST (Unsupervised Offline Video Object Segmentation and Tracking) as a simple and generic algorithm which is able to track and segment a large variety of objects. This algorithm builds up tracks in a number stages, first grouping segments into short tracklets that are spatio-temporally consistent, before merging these tracklets into long-term consistent object tracks based on their visual similarity. In order to achieve this we introduce a novel tracklet-based Forest Path Cutting data association algorithm which builds up a decision forest of track hypotheses before cutting this forest into paths that form long-term consistent object tracks. When evaluating our approach on the DAVIS 2017 Unsupervised dataset we obtain state-of-the-art performance with a mean J &F score of 67.9% on the val, 58% on the test-dev and 56.4% on the test-challenge benchmarks, obtaining first place in the DAVIS 2019 Unsupervised Video Object Segmentation Challenge. UnOVOST even performs competitively with many semi-supervised video object segmentation algorithms even though it is not given any input as to which objects should be tracked and segmented. 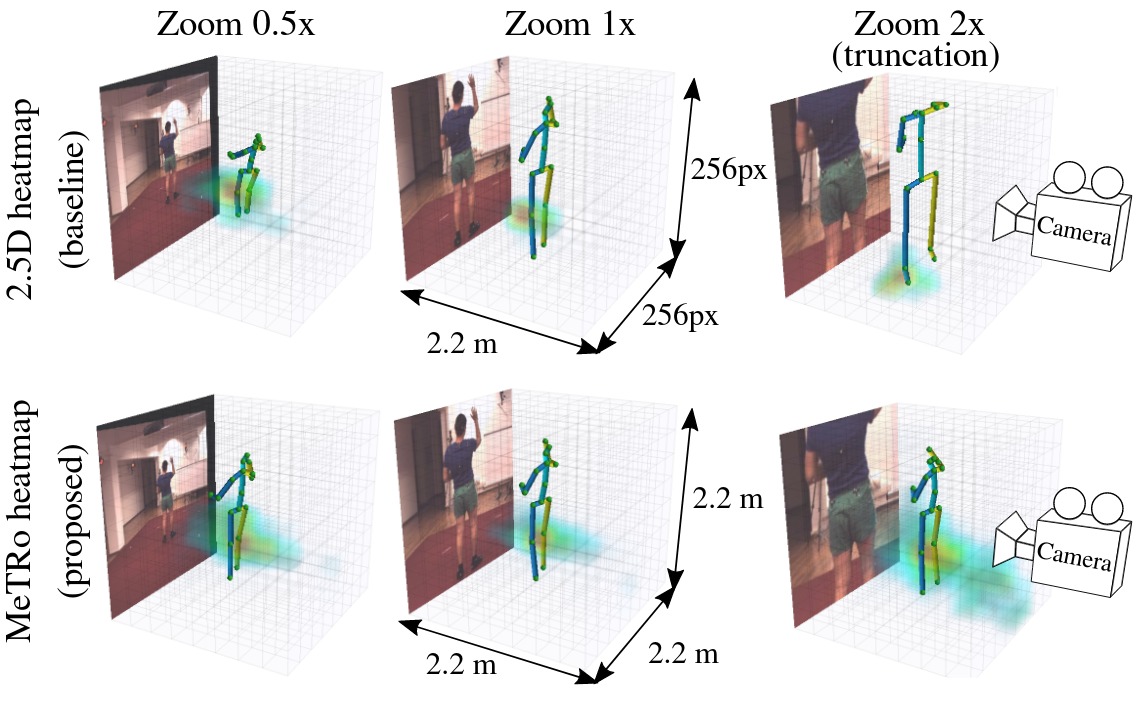 Heatmap representations have formed the basis of 2D human pose estimation systems for many years, but their generalizations for 3D pose have only recently been considered. This includes 2.5D volumetric heatmaps, whose X and Y axes correspond to image space and the Z axis to metric depth around the subject. To obtain metric-scale predictions, these methods must include a separate, explicit post-processing step to resolve scale ambiguity. Further, they cannot encode body joint positions outside of the image boundaries, leading to incomplete pose estimates in case of image truncation. We address these limitations by proposing metric-scale truncation-robust (MeTRo) volumetric heatmaps, whose dimensions are defined in metric 3D space near the subject, instead of being aligned with image space. We train a fully-convolutional network to estimate such heatmaps from monocular RGB in an end-to-end manner. This reinterpretation of the heatmap dimensions allows us to estimate complete metric-scale poses without test-time knowledge of the focal length or person distance and without relying on anthropometric heuristics in post-processing. Furthermore, as the image space is decoupled from the heatmap space, the network can learn to reason about joints beyond the image boundary. Using ResNet-50 without any additional learned layers, we obtain state-of-the-art results on the Human3.6M and MPI-INF-3DHP benchmarks. As our method is simple and fast, it can become a useful component for real-time top-down multi-person pose estimation systems. We make our code publicly available to facilitate further research.

We address the problem of reposing an image of a human into any desired novel pose. This conditional image-generation task requires reasoning about the 3D structure of the human, including self-occluded body parts. Most prior works are either based on 2D representations or require fitting and manipulating an explicit 3D body mesh. Based on the recent success in deep learning-based volumetric representations, we propose to implicitly learn a dense feature volume from human images, which lends itself to simple and intuitive manipulation through explicit geometric warping. Once the latent feature volume is warped according to the desired pose change, the volume is mapped back to RGB space by a convolutional decoder. Our state-of-the-art results on the DeepFashion and the iPER benchmarks indicate that dense volumetric human representations are worth investigating in more detail.

Existing methods for instance segmentation in videos typically involve multi-stage pipelines that follow the tracking-by-detection paradigm and model a video clip as a sequence of images. Multiple networks are used to detect objects in individual frames, and then associate these detections over time. Hence, these methods are often non-end-to-end trainable and highly tailored to specific tasks. In this paper, we propose a different approach that is well-suited to a variety of tasks involving instance segmentation in videos. In particular, we model a video clip as a single 3D spatio-temporal volume, and propose a novel approach that segments and tracks instances across space and time in a single stage. Our problem formulation is centered around the idea of spatio-temporal embeddings which are trained to cluster pixels belonging to a specific object instance over an entire video clip. To this end, we introduce (i) novel mixing functions that enhance the feature representation of spatio-temporal embeddings, and (ii) a single-stage, proposal-free network that can reason about temporal context. Our network is trained end-to-end to learn spatio-temporal embeddings as well as parameters required to cluster these embeddings, thus simplifying inference. Our method achieves state-of-the-art results across multiple datasets and tasks. 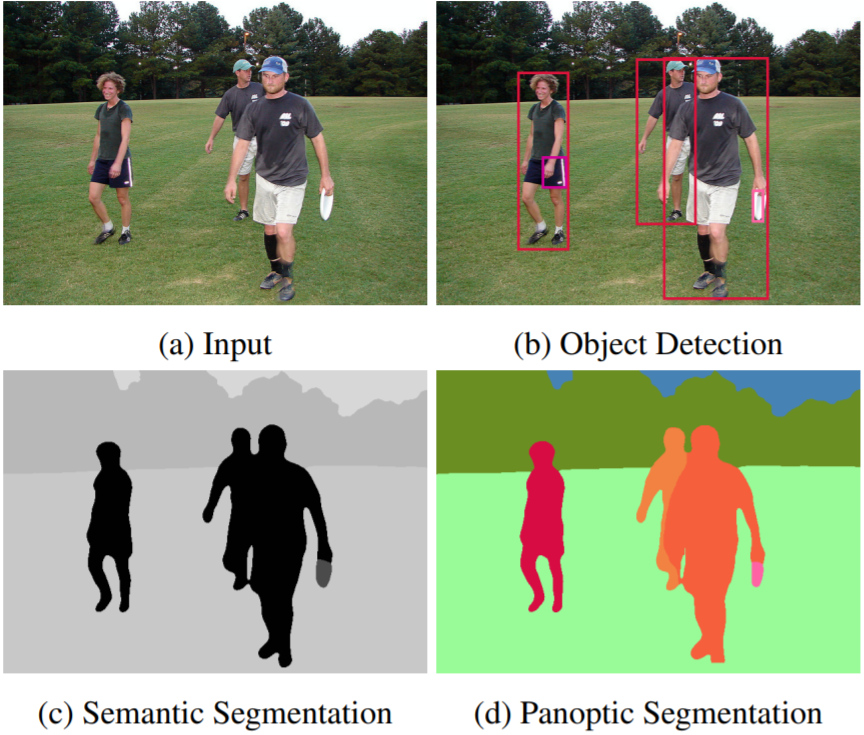 We present a novel end-to-end single-shot method that segments countable object instances (things) as well as background regions (stuff) into a non-overlapping panoptic segmentation at almost video frame rate. Current state-of-the-art methods are far from reaching video frame rate and mostly rely on merging instance segmentation with semantic background segmentation. Our approach relaxes this requirement by using an object detector but is still able to resolve inter- and intra-class overlaps to achieve a non-overlapping segmentation. On top of a shared encoder-decoder backbone, we utilize multiple branches for semantic segmentation, object detection, and instance center prediction. Finally, our panoptic head combines all outputs into a panoptic segmentation and can even handle conflicting predictions between branches as well as certain false predictions. Our network achieves 32.6% PQ on MS-COCO at 21.8 FPS, opening up panoptic segmentation to a broader field of applications.